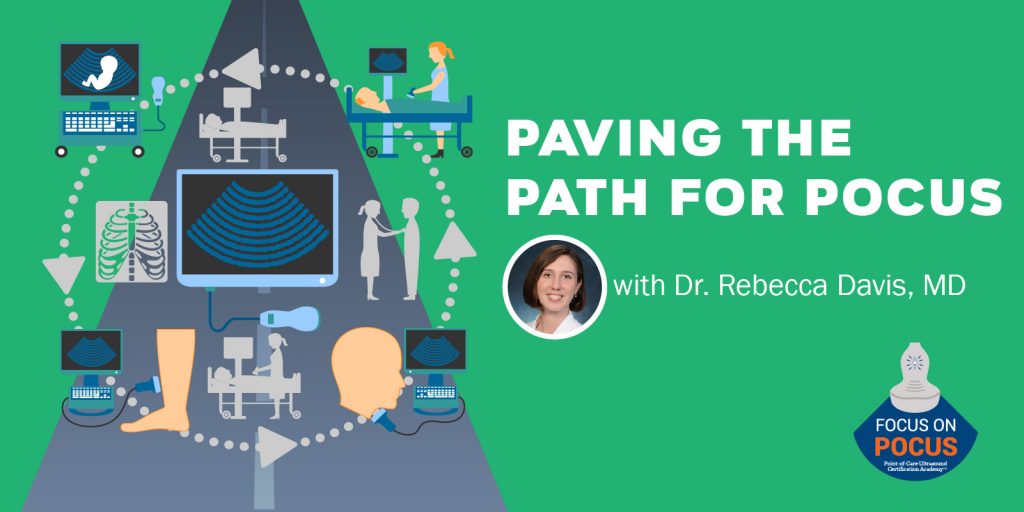 Becca Davis, MD, is an Internal Medicine physician at Thomas Jefferson University Hospital and an assistant professor at Sidney Kimmel Medical College. She completed her medical school training and internal medicine residency at the University of Pennsylvania where she went on to be chief resident before making the move to Jefferson. She is currently an assistant program director for the Internal Medicine/Primary Care Residency and associate program director for the Internal Medicine POCUS Fellowship, which just started this year at Jefferson. While she was lucky enough to get some exposure to ultrasound in residency, she really developed her POCUS skill set two years ago when she became an attending. She works closely with the EM and critical care teams to help spread her passion for POCUS across the department and participates in the institutional Point of Care Ultrasound Committee. Primarily, Becca is working to create a formalized POCUS curriculum and electives for the residency and develop a clinical pathway for hospitalists to gain POCUS skills in addition to her fellowship and clinical responsibilities.

Dr. Victor Rao is a radiologist and POCUS pioneer who first introduced POCUS to future medical professionals at the University of South Carolina School of Medicine (USCSOM). Here, he developed the POCUS curriculum, and the POCUS learning and eLearning content geared towards medical and physician assistant students. Dr. Rao went on to present POCUS to the Arusha Lutheran Medical Center in Tanzania and the University of Santo Thomas in Manila, Philippines. His passions are ultrasound and point-of-care ultrasound. 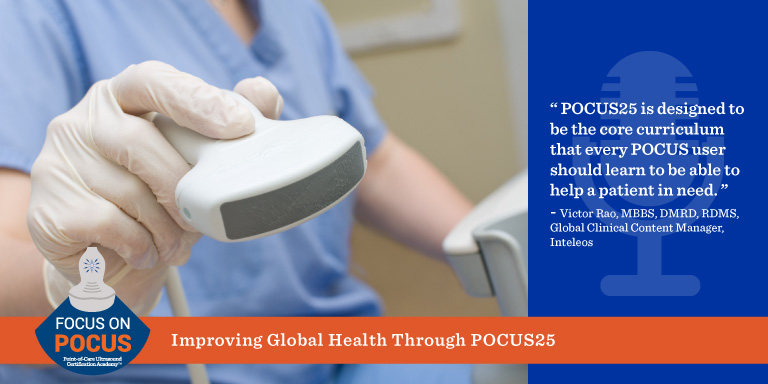 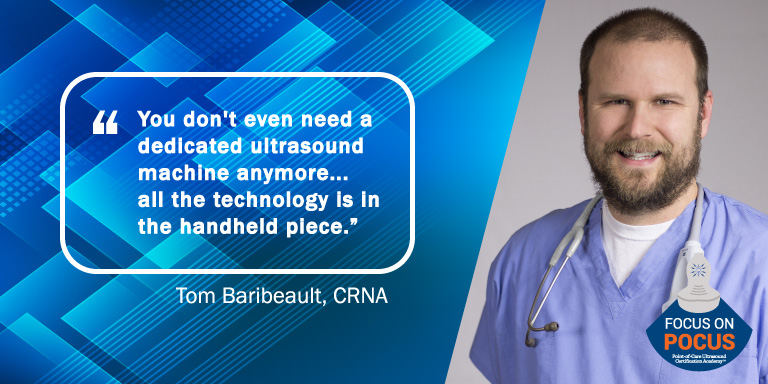 Thomas Baribeault is the founder of the Society for Opioid-Free Anesthesia (SOFA) and is currently serving as President. SOFA is a non-profit organization dedicated to education and research on opioid-free anesthesia and post-operative pain management. Thomas currently practices in Atlanta, Georgia and is responsible for implementing opioid free anesthesia and post-operative pain protocols. He received a bachelor’s degree in nursing from the Ohio State University, a Master of Science in nursing and anesthesia residency from Case Western Reserve University and a doctorate in nursing practice and pain management fellowship from the University of South Florida. 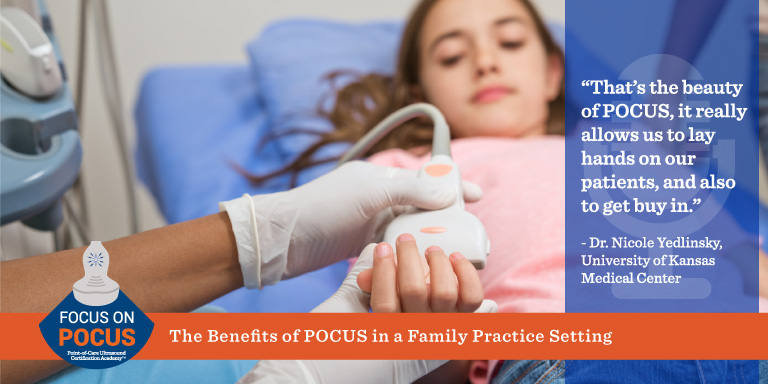 “The face to me, of the climate crisis, is the little kid struggling to breath, and that, is scary as hell.” 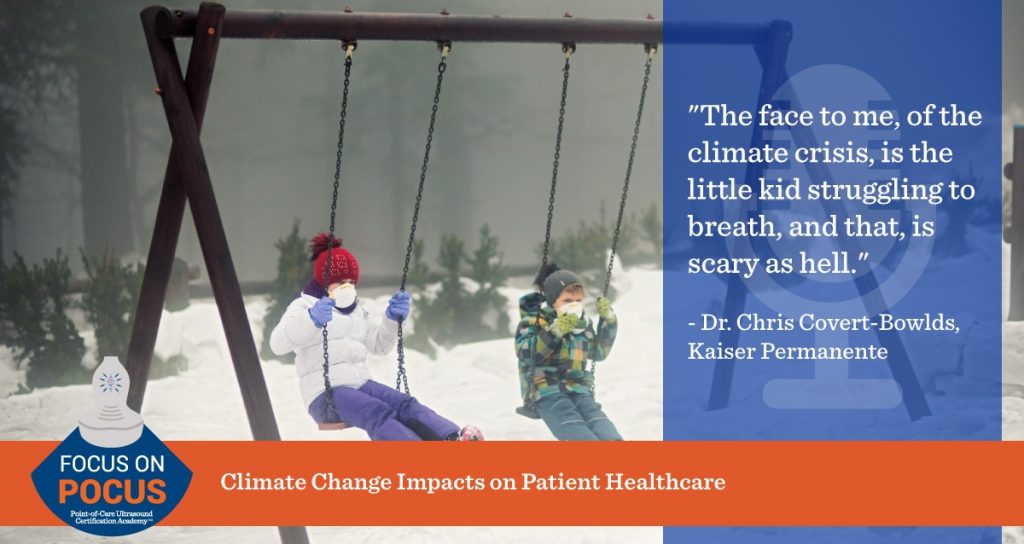 Dr. Covert-Bowlds is a family doctor at Kaiser Permanente Northgate Medical Center in Seattle. He has been doing ultrasound for soft tissue diagnosis and treatment, joint and bursa aspirations, and injections. Climate activists with Washington Physicians for Social Responsibility Climate and Health Task Force. He is also a daily bicycle commuter. 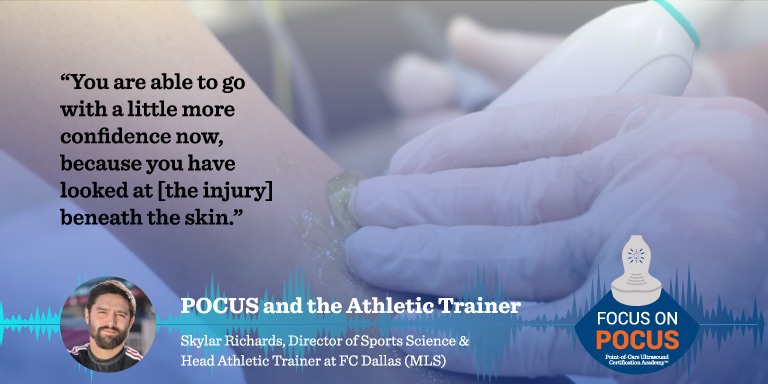 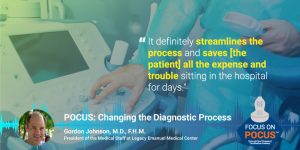 Listen to Gordon Johnson, M.D., F.H.M., President of the Medical Staff at Legacy Emanuel Medical Center, talk about how POCUS is changing the Diagnostic Process. 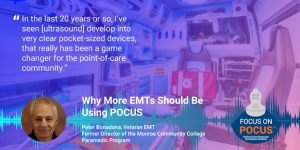 Listen to Peter Bonadona, Veteran EMT, Former Director of the Monroe Community College Paramedic Program, share his views on why more EMTs should be using POCUS. 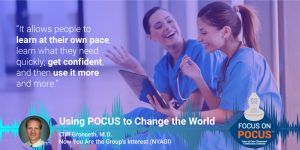 Listen to Cliff Gronseth, M.D., talk about his work at NYAGI (Now You are the Group’s Interest) and how he and his group are changing the world with POCUS.

Listen to Daniel Nash, DNAP, CRNA, Owner of Maverick Training, talk about his vision for POCUS and how he wants to help put POCUS in every clinic around the United States.